Menu
Your Cart
FREE UK Delivery on all orders over £150

A History Of Welding Helmet Evolution

Welding is an incredibly useful process in the modern world and has had a surprisingly long history. Archaeologists believe they have found evidence of welded metal joining from as far back as the Bronze and Iron Ages, with silver and lead artefacts showing signs of having been pressed or hammered together cold. Even then occasional sparks will have flown… from poorly aimed hammer blows.

Back then it was artisans who dabbled in the process and the concept of PPE was millennia in the future. What welding there was continued in that vein for a thousand years or more. So it is hard to view the history of welding helmets in isolation. They are a relatively recent innovation in the welder’s world.

It was the tail end of the 1800s before rudimentary electric arc welding processes began to develop. These used carbon electrodes. Although nothing seems to be written about it, this writer believes, that is when the first instances of arc eye and welding fume fever would have begun to be noticed.

By the final years of the 19th Century welders had begun to use goggles with darkened lenses to protect themselves against the painful condition of arc eye. This is caused by the high intensity electric spark of arc welding. The high temperatures at the weld pool emit very strong, but invisible; ultra-violet, infra-red and the more obviously visible light. The UV and IR were causing welders to suffer from cornea and retina burns as well as damaged skin from the sparks and hot metal splatters. Sadly, unprotected welding still happens even now. 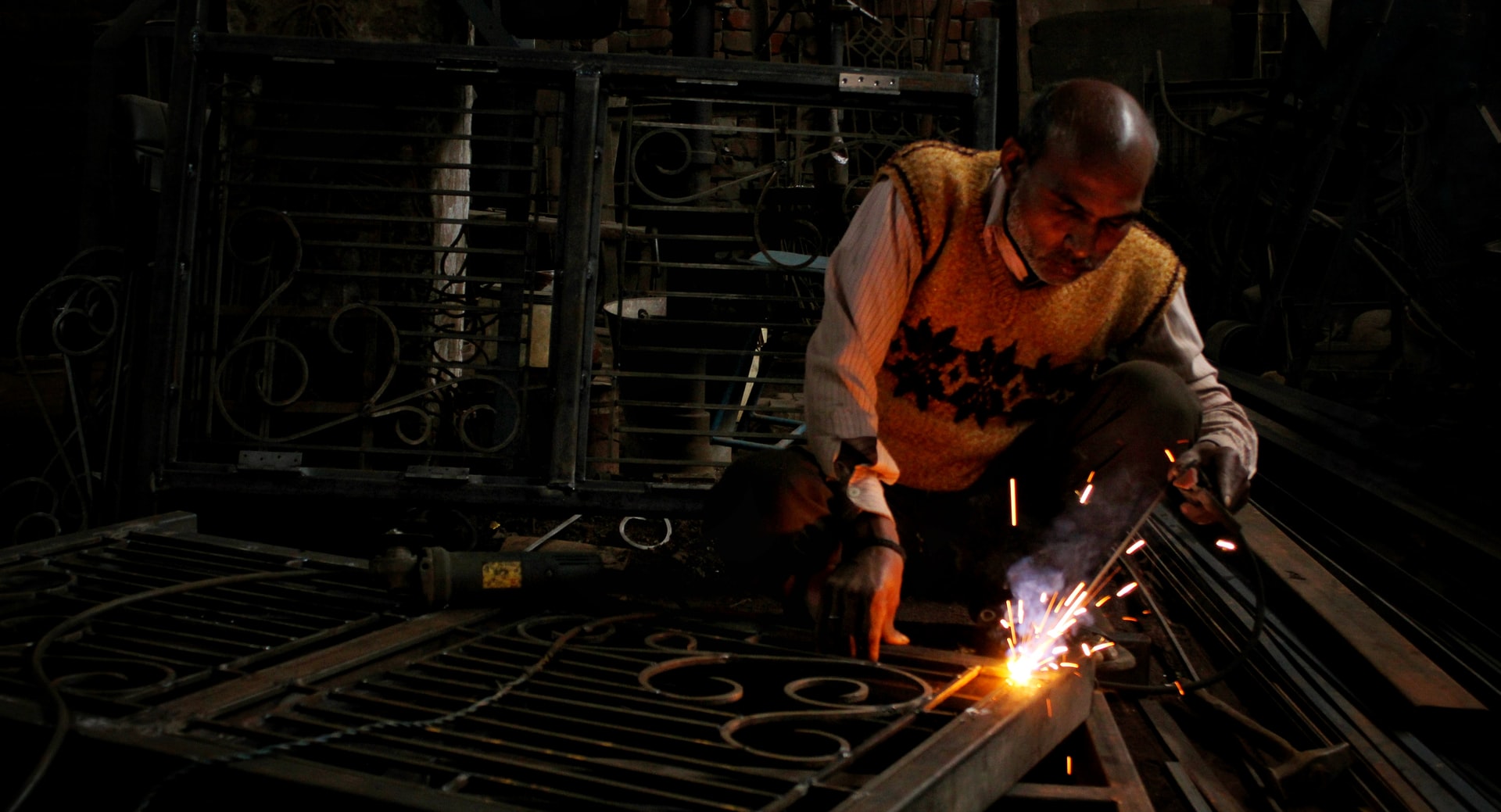 Welding also causes molten metal and flux to spatter outwards amongst the sparks. These still crude measures did not offer much protection from the intense radiation and none at all to the surprisingly toxic fumes produced by any welding process. People became frustrated at the skin burns they were suffering and also started using face shields. For the most part these were handheld, so it made the welding process very clumsy and awkward. 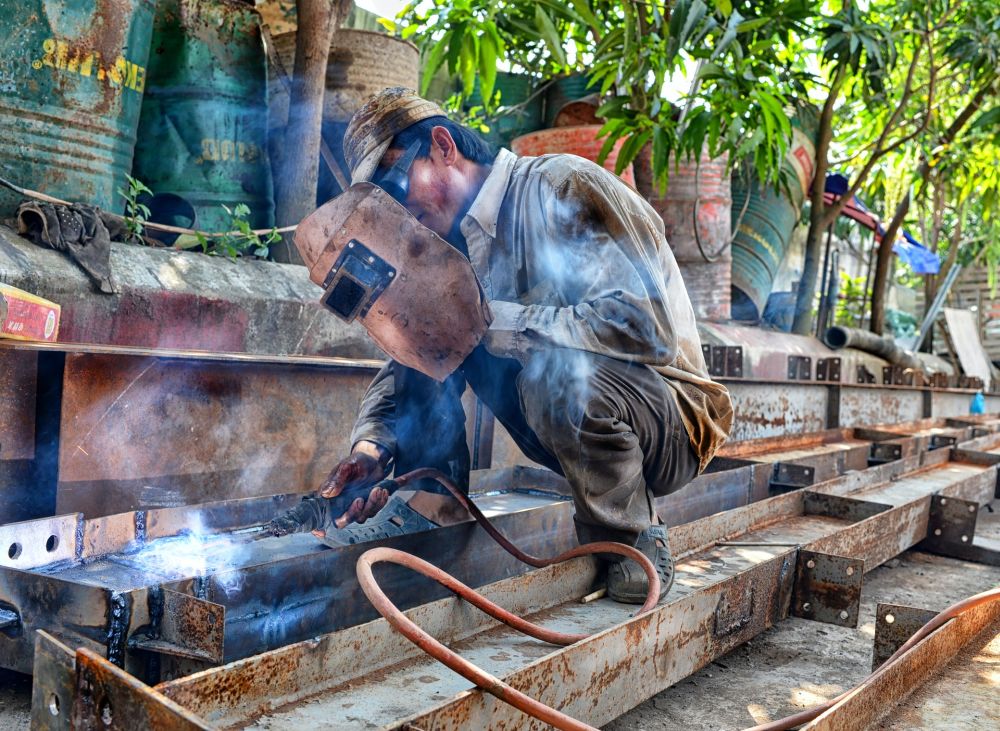 The conflicts of the early 20th century put pressure on the sluggishly developing welding trade to produce more… faster. It’s around this time that we see the first mentions of protection for welder’s eyes. Most sources quote 1937 as being the invention of the first recognisable welding helmet, but we suspect Honeywell would beg to differ.

According to this video: the first welding helmet design was actually tried out in 1905 by Frederick Bowers, later to be the founder of Fibre-Metal. According to the video, he would go on to patent his invention in 1915. However an exhaustive search of the American patent records doesn’t support this story. By 1927 he was selling them on a commercial scale.

And so to 1937: Willson Products produced a very similar looking set of protective headgear which is cited in a frequently quoted edition of Popular Mechanics from that year. It’s worth a click to view that old illustration! This design was constructed from “vulcanised fibre” and had a fairly cumbersome looking viewing port. 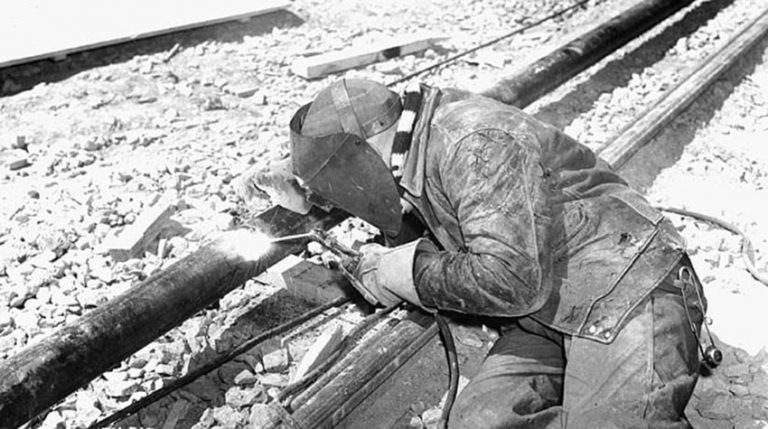 Most of the literature we’ve been able to find talks about the viewing port or lens being made of polarising glass. This would have been successful at reducing the glare from the visible wavelengths of light. It is unlikely that many of these early designs would have reduced the UV and IR intensities very much.

According to research, (nicely summarised here) there are three broad classifications of ultra-violet light: UV-A, UV-B and UV-C. A and B wavelengths are most associated with tanning and sunburn. The atmosphere blocks almost all of UV-C – thankyou ozone layer – while glass blocks around 100% of B and C.

That still left the troublesome A wavelengths to play havoc with welder’s eyes and skin. Additionally, the fume and dust was still getting into people’s respiratory tracts.

Another issue with these old designs was that the mask was able to flip up on its headgear to give the welder a clear view of the work piece as torch and welding rods were lined up. The helmet then had to be flipped down with a nod of the head. This gave lots of neck ache potential for full time welders!

Alternatively, one hand had to be moved away from the ready position, to manually drop it back into place. This makes it more difficult to see through the darkened glass to reposition the hand to start the weld. Other designs had darkened glass shutters that would flip up to allow the welder to see clearly. As before, a similar manoeuvre was needed to flip the shutters into place before the welding arc was struck.

After the second world war and through the 50s and 60s the growing plastics industry started producing materials that were suitable for use in welding protective gear. These developments made welding helmets better able to protect against impact as well as radiation.

For welders though, the problem of toxic fumes remained a serious health issue. Attempts to protect workers from inhaled toxins and dust have a long history. In other fields of activity, Roman era miners extracting red lead oxide used animal bladders. Details are scarce!

In the 18th century, there is mention of rubberised fabric bags with a transparent window being used. These were supplied with air from some kind of pressurised tank.

A patent was issued in 1848 in the USA for a “Haslett’s Lung Protector”. This used a system of valves and filter made from damp wool to remove dust from the air being breathed. We can find little mention of it being taken up in the working world though.

Myth abounded in the absence of good solutions. One that we have seen mentioned in numerous texts was the milk myth! Apparently, welders believed that drinking milk before work or even keeping milk in your mouth during welding would protect you from absorbing the metals and other toxins from the fume.

It seems that the thinking behind this old wives’ tale was that the calcium in milk would crowd out the other less desirable metals. In reality it was as useless as drinking bleach to keep a certain recent virus at bay!

The first powered air purifying respirator appears to have been designed in 1967 by William A Burgess. He came up with the idea to protect workers in the coke ovens of steel making plants. These workers were developing lung cancers at ten times the rate normally expected.

When his proposed design was accepted, he was hired to produce his design. This he did: at home on a library table he bought from a nearby library of medicine. It would be some time before this technology found its way into the welding trade.

By 1975 Racal – a UK company – came up with a version of PAPR for mining. They would innovate this over the next couple of years to make it more suitable for other industrial environments. By 1982 this product had evolved into the Airmate which was a much lighter, more compact device that improved users’ mobility. It’s unclear whether any welders were taking advantage of this technology.

Significantly, 3M became involved in the respirator niche in 1993, introducing the GVP PAPR, which had a chemical filter to absorb gases and vapours as well as particulates. They continued to innovate and put more products on the market. But welders’ needs had not yet been addressed fully.

It was to be nearly half a century before the discovery of liquid crystals and light sensitive electronics was to lead to the next leap in standards of protection. Liquid crystals were first used in electronic calculators, watches and clocks. They worked by blocking light selectively from a back-light behind the display. In various places, people began to realise that the LCD displays could switch on and off quite rapidly.

The first to get this idea to market in the welding world, was Hornell International, a Swedish company. In 1981 they came up with an electronically controlled LCD shutter. When fitted to a welding helmet viewport, the shutter was controlled by a light sensor that could activate the liquid crystal shutter. The viewport would darken almost instantaneously, when the arc was struck.

This was the first Speedglas Auto Darkening Filter. The great advantage of these helmets was that there was no “nodding dog” action to get the mask to drop down just before striking the arc. This was a major weakness of previous designs. We can only imagine the many times there must have been welders whose arc was struck before the helmet dropped down properly, with the associated consequences of accidental UV exposure.

The Adflo PAPR technology and the LED ADF (auto darkening filter) ideas were so successful that in 2004 3M acquired Hornell. They got all the rights to the Speedglas and Adflo technologies and branding. There were many advantages to this pairing of technologies. The helmet was in place all the time the welder was working. This improved productivity and massively reduced accidental exposure to UV, IR and sparks. The filtered air supply protected the welder’s respiratory tract and helped to keep the welder a little cooler. This was a game changer for welders. 3M’s enormous network meant that welders almost anywhere could now access the top of the range welding PPE. 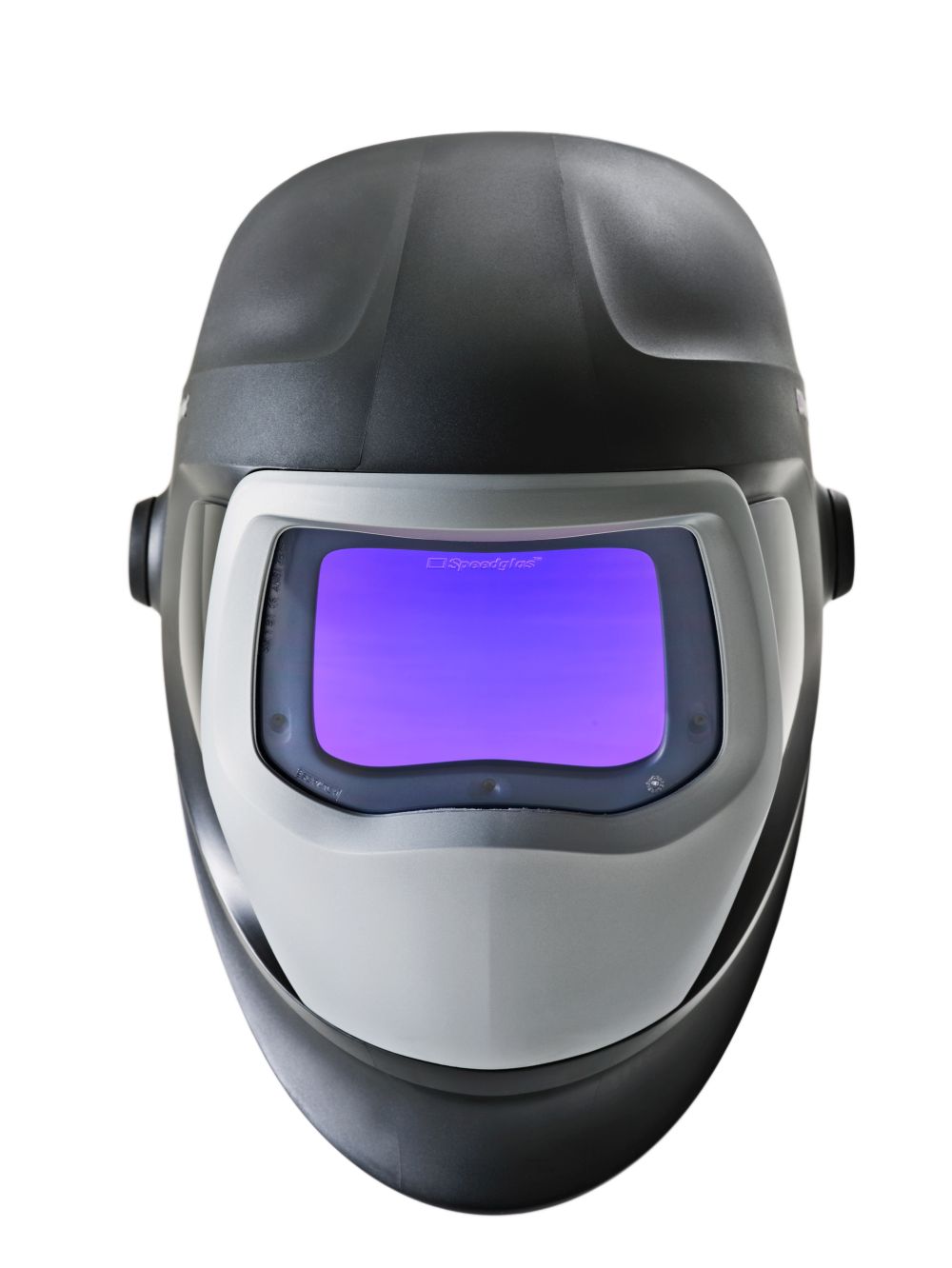 In the UK, modern welding helmets are governed by BS EN 175:1997. This standard “specifies safety requirements and test methods for personal protective equipment used to protect the operator's eyes and face against harmful optical radiation and other specific risks or hazards in usual welding, cutting or similar operations.” More details can be found here.

It would be 2015, before the ANSI Z87.1+ standard was established in the USA to bring protective eye wear and helmets under a regulatory framework and improve protection standards. This was revised in 2020 to keep up to date with the latest technological and process advancements.

For welding helmets these regulations set a threshold for ultra-violet and infra-red protection as well standards covering insulation against heat and electrical currents. There was also a requirement for these PPE items to be either non-combustible or self extinguishing. For welding professionals this was a huge improvement in their working conditions. The problems of welding fume were still serious as the emerging PAPR technology had not been widely taken up by then..

In 2017 another Swedish company, ESAB, founded by Oscar Kjellberg, back in 1904, emerged into the innovative PPE niche for welders. They first introduced their Sentinel A50 – a pretty revolutionary, and ergonomically advanced ADF welding helmet. They followed this with the Air version a few months later which debuted at the Schweissen-Schneiden 2017 trade show. This raised the game for respirator welding masks bringing in various improvements in user friendliness and convenient controls.

Today the pinnacle of welder’s PPE in the UK is probably represented by ESAB’s Sentinel A50 Air Helmet and The ESAB PAPR Unit 1m Hose Package and the 3M Speedglas 9100XX FX Adflo Air Fed Welding Helmet. With either of these welding helmets, a welder can feel comfortable tackling the most challenging of welding projects in the full range of environments presented by today’s technology.

These welding helmets include convenient controls and electronic systems. These allow welders to choose preset values for the shade range to suit the particular welding job that they are faced with. The shells are heavy duty enough to give real protection against knocks and falling objects.

The History of the Welding Helmet – AWS: https://www.awsi.com.au/blog/post/the-history-of-the-welding-helmet

Equipment for eye and face protection during welding and allied processes – BSI: https://middleware.accord.bsigroup.com/pdf-preview?path=Preview%2F000000000001295615.pdf&inline=true 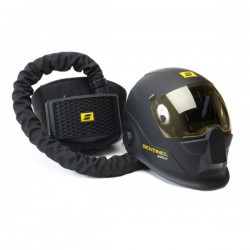 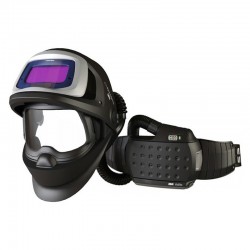 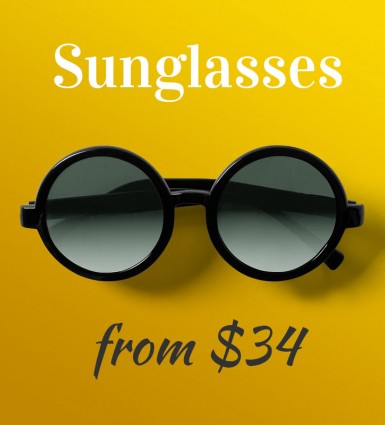